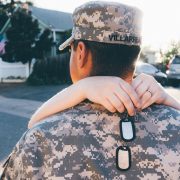 The United Service Organizations, in partnership with Team Red, White and Blue, encourages veterans to improve their communities.

Team Red, White and Blue’s mission is to enrich the lives of America’s veterans by connecting them to their community through physical and social activity.

The organization has more than 100 chapters, Pinter said, noting they are located in every state and in 10 countries with only nine employees. Volunteer leaders make up the bulk of the organization’s personnel.

To open the training Pinter asked a simple question — does the country have enough leaders?

Pinter noted a recent leadership survey among veterans where they “unanimously” said they “still wanted to be leaders and they still wanted to lead after they got out of the service.”

That’s another reason to do seminar like this one, Pinter said, “because we want to help equip veterans to be better leaders.”

“And we want to make veterans better,” Pinter continued. “During the course of this thing, [if] you take one thing that you can go back to your job with and make you a little bit more efficient after we’ve talked about it … that’s a win.”

During the leadership seminar, Pinter combined definitions of leadership from the 18 veterans in attendance with examples they’ve experienced throughout their lives and careers.

“Team Red, White and Blue goes out of its way to try to find people,” he said, “and try to develop people who can be good local leaders for us.”

Pinter pointed to the generation of Americans known as the Greatest Generation as inspiration for leading the nation.

“Those guys fought and won World War II and Korea,” he said. “They came back and became titans of industry and leaders of our country for the next 50 years, right?”

They grew up in the Great Depression, Pinter said, and then they went and accomplished many great things

“There’s not a single reason our generation of veterans can’t do the same thing,” he said. “We’re at the tail end of the two longest wars our country has ever fought right now, and smaller pools of people have fought those wars than before.”

“Think about all that leadership experience,” he said. “There’s no reason that you can’t go back in your communities and be the leaders that our country is drastically needing.”

Pinter went on to remind the veterans of their response to his initial questions.

“The first question I asked you guys was do we have enough leaders in this country and everyone said ‘no,'” he said. “So go fix that.”

Mike Oldham, a Navy vet who attended the seminar and participated in the rock-climbing camp, shared his thoughts on the training.

“I thought it was very practical and well presented,” Oldham continued. “The information wasn’t some sort of a new theory that you hadn’t heard before. It was a good compilation of information in a format that was easy to understand and will be easy to remember and apply in, sort of, day-to-day life.”

Oldham, a Golden, Colorado, native, said his personal definition of leadership is “a person that can motivate and inspire other people to get outside of their comfort zone and accomplish real, meaningful goals.”

“I think the emphasis, to me, is being able to get people out of their comfort zone,” he said. “Get them to push themselves and help push other people in places that they wouldn’t normally go.”

“Like J.J. said, we’re not selling anything except for relationships or people,” he said. “So you can get companies who have this distorted view, but it was simple.”

“It was ‘Build that relationship and be that person in the community that veterans can look up to and be there,'” Greenwood said.

Being there, he noted, can mean just “shutting your mouth and listening,” because that’s pretty important to just kind of hear that person out and go from there.

Greenwood said he made his definition of leadership “simple” — belief and motivation.

“A leader can motivate people to do something that they believe in,” he said. “You have to buy into what you’re doing in order to get other people to do what you want them to do, or they need to do.”