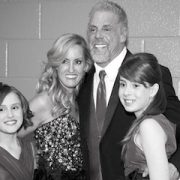 This last week we lost a true legend in the wrestling world – the Ultimate Warrior collapsed and lost his final fight on the 8th of April in Scottsdale. Known for his rope shaking performance, he would gather his strength from his fans in WWE.

In a heartfelt message and phone call to Mike Cash from his wife, Dana, we learned more about the man behind the entertainment. His creed as a husband, father and entertainer was “Live Strong, Act Bold, Be Brave. Nothing is too hard to do, always believe.” His outlook and admiration for our servicemen and women was always a keen interest of his. He leaves his wife, two daughters and his mother. To view Dana’s letter please visit the web site by clicking here

As a result, Dana has selected to support the work of Operation Family Fund by having all donations in lieu of flowers be made to our charity.

We are honoured to have received this pledge and we will seek to continue our work helping wounded veterans and their families as a tribute to The Ultimate Warrior.